Hike Europe's Most Famous Ancient Trail During This Jubilee Year

Spain · About Culture & History
Only once or maybe twice a decade, the Camino de Santiago becomes an even more remarkable hiking journey through Spain.
Pilgrims and tourists have been hiking the “Way of St. James,” as it translates, since the 9th century. It’s a 500-mile (800 km) route across northern Spain to the Cathedral of Santiago de Compostela in Galicia, the spiritual home of the apostle James who preached in Spain, became its patron saint, and whose remains were returned here and enshrined.
The route of St. James’ final, return journey to Spain became a pilgrimage, one that continues to this day.
Spiritual and religious devotees walking the route today are joined by those taking the “Way of St. James” as a journey of self-discovery, to achieve a personal challenge, or to explore this unique cultural experience and northern Spanish countryside actively on foot or by bicycle.

And if your trip coincides with a Jacobean (from “James”) Holy Year, the experience will be all the more exceptional. The “Xacobeo Holy Year” occurs when the festival of St. James, which takes place annually on July 25th, falls on a Sunday. That means the special celebrations of Jubilee Year happen once or twice a decade.
Due to the pandemic, the Holy Year 2021 was extended for the first time over two years. Already, special festivities have begun for its second half. “Light up the Xacobeo” is an initiative where more than a hundred monuments and landmark buildings throughout Spain are illuminated to honor the special pilgrimage year. Half of those are along the actual Camino de Santiago. 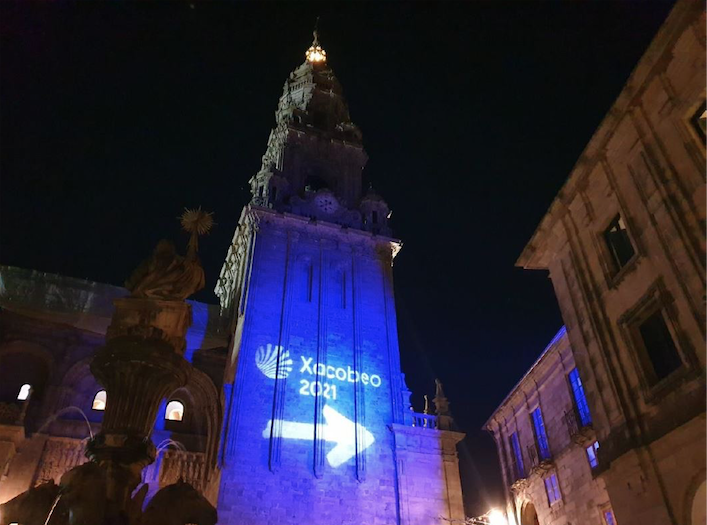 (Illuminations at the terminus, at the Cathedral of Santiago de Compostela, courtesy of the Tourist Board of Spain)
They include a wayfinding arrow, pointing the way to the Cathedral of Santiago de Compostela, the terminus of the Way and a long pilgrimage. They mirror the wayfinding signs that are used to mark the actual route still today.
This year’s Xacobeo Holy Year has gone global. Recognizing how communities and the world have come together even more during pandemic times, “Light up the Xacobeo” illuminations and wayfinding have spread beyond Spain’s borders.
Here, for example, is Notre-Dame Cathedral in Ottawa, Canada, illuminated for the Holy Year Jubilee – wayfinding arrow guiding pilgrims and seekers towards Spain. 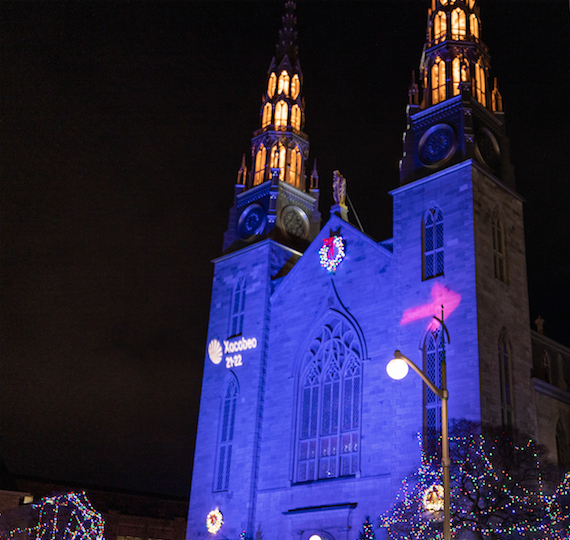 (Photo courtesy of the Tourist Board of Spain in Canada)
In addition to special, wayfinding illuminations, the Way of St. James in Spain this Jubilee year will be celebrated by events including concerts, art exhibitions, films, conferences and educational activities for all ages.

That’s in addition to all the traditions of the Way of St. James, not just wayfinding markers that range from the humble to the spectacular illuminations of the Jubilee year. 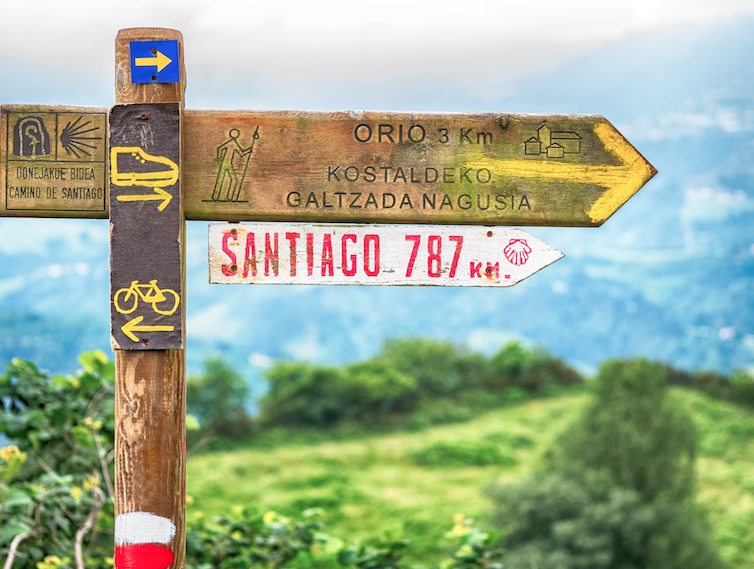 Scallops are the symbol of the Camino de Santiago. The shellfish is plentiful on the beaches of the region, and originally the shells may have been practical for pilgrims to scoop shared food and water, as well as become a souvenir of the life-changing journey.
Pilgrims still wear a shell to show they are on the Camino de Santiago pilgrimage. And scallop shell markers, including brass shells inlaid in cobblestone paths, or stylized sideways shells, often gold on a blue background on signposts or buildings still mark the path through towns and countryside. 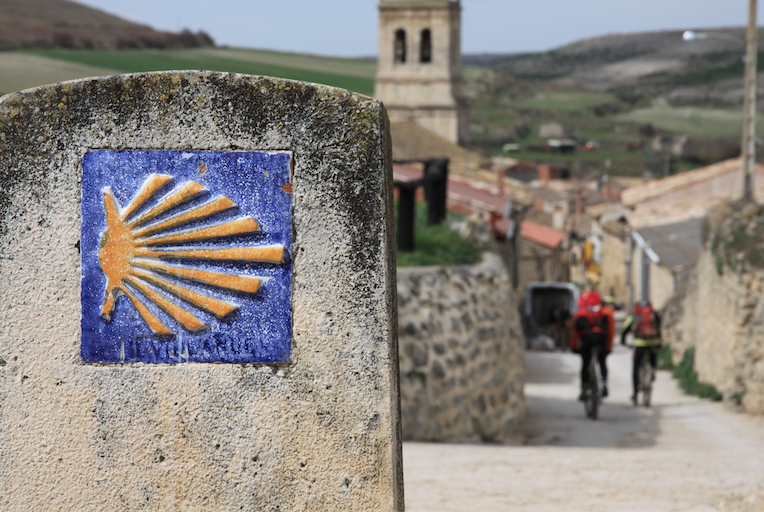 Most pilgrims then and now buy and carry the credencial. In days of yore, it provided access free accommodations and support for pilgrims along the Way. It’s also like a passport, an official record of your journey. You get an official St. James stamp in each town you eat, or official stay along the way, and presented at the Pilgrim's Office once you reach Santiago, proves that you have completed the official route and qualify for a 'compostela' – a certificate of completion.
A Pilgrim's Mass is held in the Cathedral of Santiago de Compostela twice daily, and pilgrims who received their compostela the day before have their countries and where they started their journeys announced during Mass.
Pilgrimages had trickled down to only a few hundred travelers along the Camino de Santiago by the 1980's. Then, in 1987, it was declared the first European Cultural Route and a UNESCO World Heritage Site. Modern pilgrims and secular active travelers re-discovered the appeal of the historic route.
These days, 300,000 or more people make the trip every year on foot, by bicycle or horseback, and in escorted tours by vehicle that stop at highlights along the way. During Jubilee years, that number swells.
The trip on foot from the Spanish border nowadays takes about a month. Not everyone who walks on the Camino receives a compostela, but you can still earn one without a month-long commitment.
To qualify, you must make the pilgrimage for religious or spiritual reasons, even if they are your own spirituality and inner quest, do the last 100 km (approx 60 miles) on foot or horseback, or the last 200 km (approx 120 miles) by bicycle, AND you still need to collect a certain number of stamps in your credencial which you present at the Pilgrim's Office in Santiago de Compostela.
The next Jubilee Year for the Camino de Santiago isn't until 2027, so don’t wait to experience this uplifting, unique experience.
As the Tourist Board of Spain says: Just walk. Buen Camino.

Top image courtesy of the Tourist Board of Spain.
Unless noted, other images: Getty
All rights reserved. You are welcome to share this material from this page, but it may not be published, broadcast, rewritten or redistributed.

Top Reasons This is Puerto Rico's Most Iconic Luxury Hotel

How the Whole Family can Savor a Disney Vacation: At its Food & Wine Fest